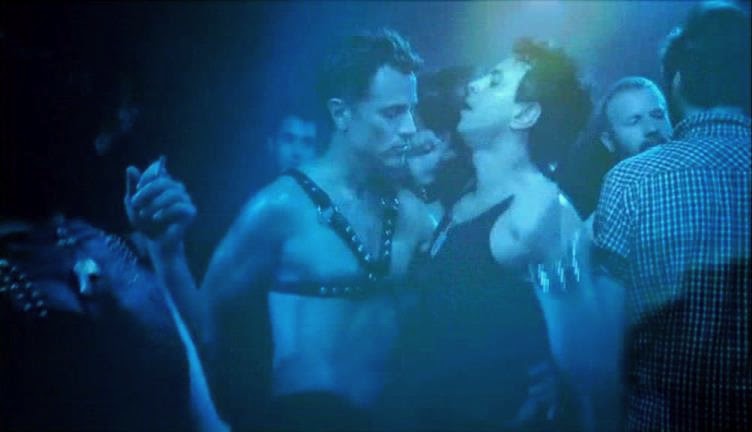 James Franco’s journey from Spider-Man co-star to multifarious would-be Renaissance man has culminated in a small bombardment of film projects in the past eighteen months. These labours have included two Faulkner adaptations, last year’s As I Lay Dying and the upcoming The Sound and the Fury, and a gruelling, unfiltered, but somehow compelling version of Cormac McCarthy’s hillbilly grunge epic Child of God. Franco officially co-directed this oddity, although Interior. Leather Bar. seems to be more the brainchild of collaborator Travis Mathews, chiefly a documentary filmmaker whose subject is the more confronting zones of gay life. Blending meta-narrative and art-happening stunt, Interior. Leather Bar. meditates on the nature of acting as a way of grazing the edges of personal reality, in the context of confronting cultural depictions of unfamiliar sexuality. The film supposedly depicts, documentary fashion, Mathews’ attempt to recreate a legendary 40 minutes’ worth of hard-core footage cut from William Friedkin’s Cruising (1980). That film, shot on location in New York’s leather bar scene, had a troubled production and reception owing to the controversy of its depiction of that milieu, which was viewed through Friedkin’s delirious, infernal conception of modern urban life. Censorship only seemed to confirm institutionalised homophobia, turning what was authentically recorded of the era’s real niche gay life by the film into shadowy, culturally redacted netherworld. Cruising’s problematic achievement as both document of the period, exploration of the dark side of human sexuality, and polarizing product of a time when such reassuringly squeaky-clean, mainstream-friendly queer fare as Beginners or The Kids Are All Right (both 2011) were unheard of, has made it, whether one approves of it or not, a totemistic moment and a battleground to this day. 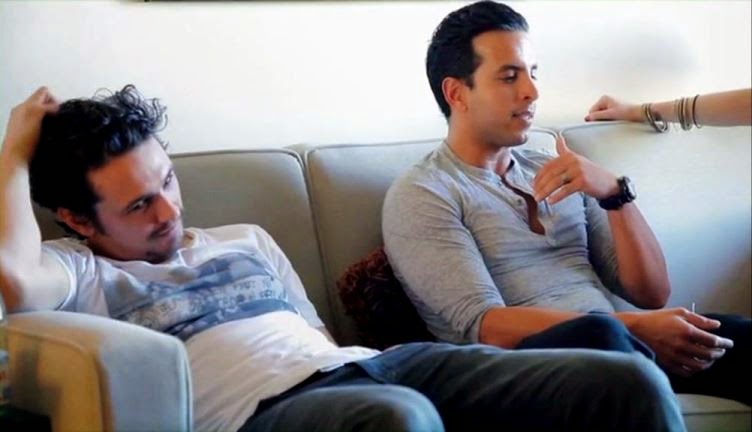 So Mathews and Franco set out to recreate the texture of the era’s hedonism, like art historians rebuilding some shattered monument to plug the hole left in a cultural landscape. Franco explains at length that he’s taking on the implicit rendering of gay sexual activity, or indeed any non-normative behaviour, as a realm of taboo otherness, a construction of unfamiliarity which creates prejudice as well as being a product of it. Much of Interior. Leather Bar. purports to be a making-of record of the recreation project, of which only relatively brief snatches are seen. Whilst depiction of gay sex is crucial in the film, on another level this is fundamentally about acting, in terms of personal identity, and the creation of false realities that serve the needs of an audience. Actor Val Lauren, who starred in his biopic of Sal Mineo, Sal (2011), is cast here as stand-in for Al Pacino. Like Pacino the man and actor who worked on the original, perhaps, and certainly like his character in the original film, Lauren is called on to perform in contexts where the acting must at some point confront a personal limit, where the straight actor’s reflexive disinterest or even distaste in the gay sexual activity might snap in – or, prove non-existent, per macho anxiety. Thus Lauren's internalising of the gay panic of thirty years ago seems at first a little old-hat, but one question here is how much have we really evolved, culturally speaking, since 1980, in terms of what we allow representation on screen. 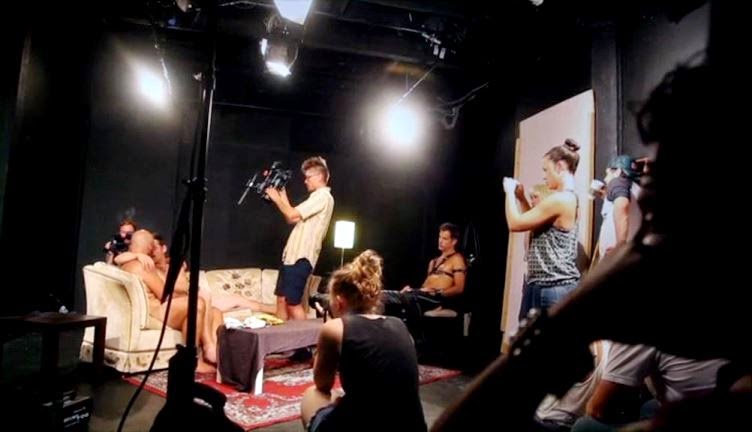 Tackling that question, Mathews and Franco set out to normalise the verboten heart of Cruising’s expressive lode in portraying raw homosexual behaviour. But they also explore how an audience relies on actors to transmute our fantasies into performance, a creation of observable experience. To achieve the full recreation of the Cruising sex scenes, the filmmakers need performers who can actually do them - that is, gay actors or men willing to perform sex acts on camera. For the actor, playing a movie role entails actually doing a thing, or a simulacrum of a thing, that allows vicarious pleasures and pains for others. Though the capacity to slip in and out of such identities is precisely the one thing we pay and prize actors for, there is always going to be a limit of distance on what an actor will and can do to suppress their own identity. Val and another actor who says he’s straight stumble clumsily through preparations for the extended stunt whilst feeling each-other out - cruising, in a way - about their feelings in this situation. Interpolated throughout are shots of various actors and actuals who say their little piece about their motivations for getting into the project, whilst Lauren chats on the phone with his agent and his wife to release his discomfort and confusion. 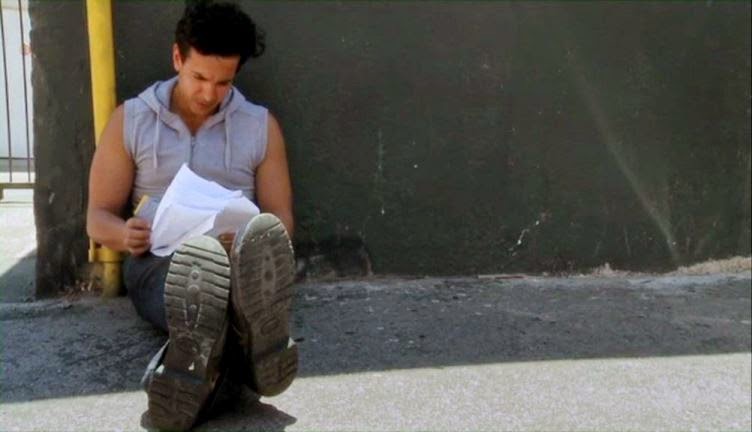 The very final shots suggest that in the same way that Lauren is expected to become Pacino, who is in turn expected to play a character who is trying to fit in in an environment where his alienness must sooner or later be revealed, Mathews and Franco are interested in chasing Cruising’s fascination with psychological dissolution, a common theme of Friedkin’s. Interior. Leather Bar. remains mostly a theory for an interesting exploration of this theme, aping Cruising’s driving notion of identities becoming blurred in close contact with new languages of flesh, without going anywhere with it. Mathews and Franco's filmmaking mimics Friedkin’s in an act of appropriation that rhymes with what the performers are asked to do, multiplying realms of media reality, a reflection within a reflection. And yes, Mathews and Franco do a good job recreating the specific, grimy, almost neo-expressionist look and sound of Cruising, seen in short sequences composed of staccato edits punctuated by vivid, hardcore shots. Such shots bluntly earn the film’s spurs as transgressive fare. But the film threatens to devolve into a rather trite moral, that watching gay sex up close will make you chill out generally on the subject. Franco’s participation borders on self-congratulatory as the inherent riskiness on making such a film is reiterated several times, but his method of playing confrontational provocateur is here more sophisticated than in Child of God’s gauchely contemplated necrophilia. The perpetual, invisible quotation marks that hovered around Franco’s participation in a mainstream variation on the same ideas, This Is The End (2013), always feel present here too, however, and the film as a whole distanced me from the very idea that I could see the "real" Franco or Lauren in this context; they play dramatically convenient projections of themselves, and want us to know that. The hour-long run time means that the film ultimately feels more essayistic than dramatic, in spite of the genre-blurring, and ultimately it feels caught between two different modes of expression without satisfying either. 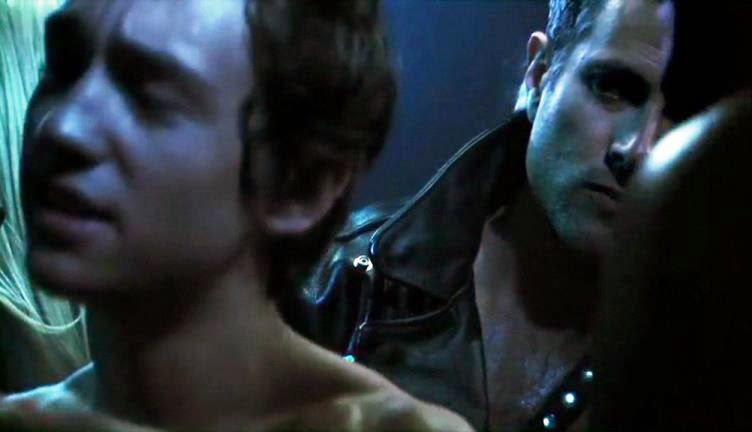 The project succeeds at least in its gazing, presenting as a climax (in both senses of the term) an extended lovemaking session between a couple of leather daddies with a masturbating voyeur in the scene and a crew of filmmakers beyond the scene, a real sex act performed for aesthetic recreation transmitted through layers of watching. This casts a weird spell through the purposeful attempt to remove precisely the aesthetic that was key to Friedkin’s film: the thudding dance music, stroboscopic lighting and editing, and grinding hysteria give way instead to a kind of zoological documentary, with the act of detached third-person viewing, represented by Val-as-Pacino-as-cop/outsider, taken by Mathews as more important than the sex acts themselves. How the viewer responds is the phenomenon under study; the dividing line not just between gay and straight, actor and audience comes under question, but divisions of intimate and public behaviour, art and pornography, capturing not merely the surface reality of something usually kept under wraps but privileged with a glimpse of a strange zone of nullity where no such demarcations apply. Interior. Leather Bar. doesn’t forge any grand, new territory for the perverted arts, but it does have a surprising breadth of ambition, and it tackles those ambitions with enough balls to achieve a minatory grace. 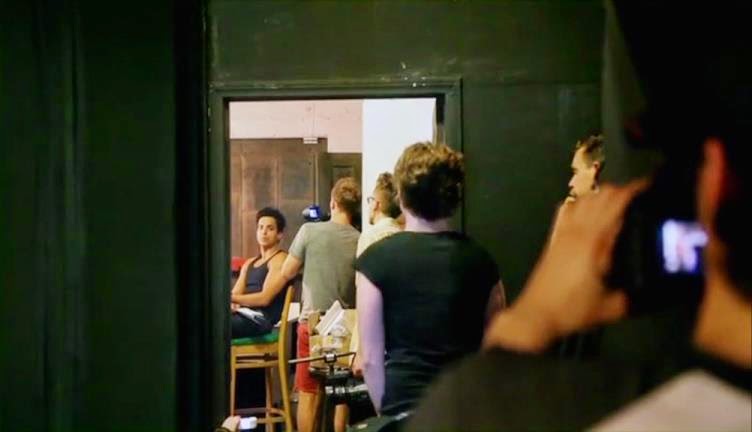