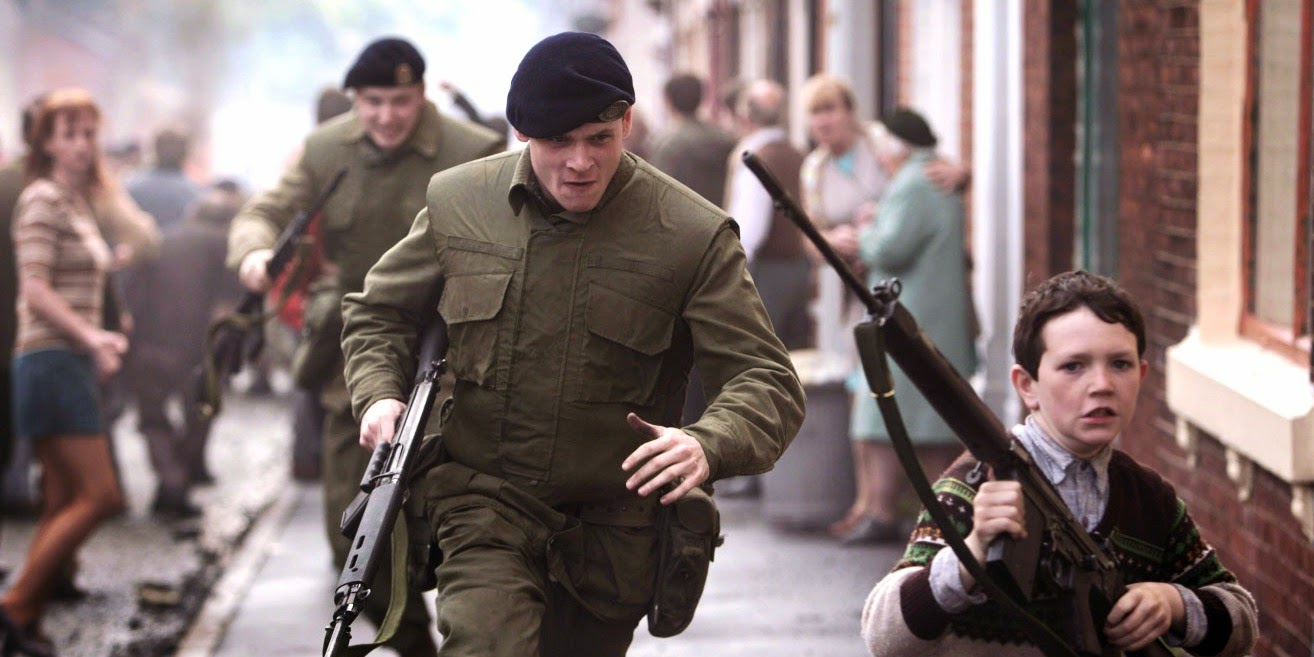 Pvt Gary Hook (Jack O’Connell) is first glimpsed amidst a squad of young soldiers, being put through their paces in the chilly expanses of the English Midlands. Hook is an orphan from Derbyshire, and has a son he's been forced to place in a boy’s home whilst he’s in training. We don't learn much more about Hook, but can presume the young squadie is attempting to carve out a place for himself in society through serving it, at the risk of possibly leaving his son to grow up as he did, alone and striving, if he dies in action. Soon his unit finishes training and is assigned to keep peace in Northern Island as the Troubles are combusting. The unit's new lieutenant, Armitage (Sam Reid), is a callow toff whose accent and uncertainty with his men stoke the amused disdain of the private soldiers. “You are not leaving the country,” Hook and the others are told before deployment, a piece of reassurance Hook passes on to his son, but once plunged into the midst of the civil conflict boiling into the streets they might as well be in the Wild West. Armitage has his men venture out to cover an operation by the Royal Ulster Constabulary to find a weapons cache without riot gear, in an attempt to not appear too aggressive before the populace. At first the manifestations of conflict seem puerile, as balloons filled with piss hurled at the soldiers conflate political resistance with boyish pranks. But circumstances escalate with terrible speed: the RUC coppers beat up suspects in the street and rifle a house, causing a crowd to swiftly gather and assail the army cordon. One soldier is knocked cold and his rifle snatched up by a kid. Hook and another soldier, Pvt Thompson (Jack Lowden) are sent to retrieve the weapon, only for the pair to be ganged up on and thrashed by a gang of furious youths. Armitage and the rest of the unit flee, leaving Hook and Thompson to the mercies of gun-wielding Provos Quinn (Killian Scott) and Haggerty (Martin McCann), who shoot Thompson and chase Hook off through the twisting streets of West Belfast, forcing the hapless young private to hide in the depths of enemy territory. 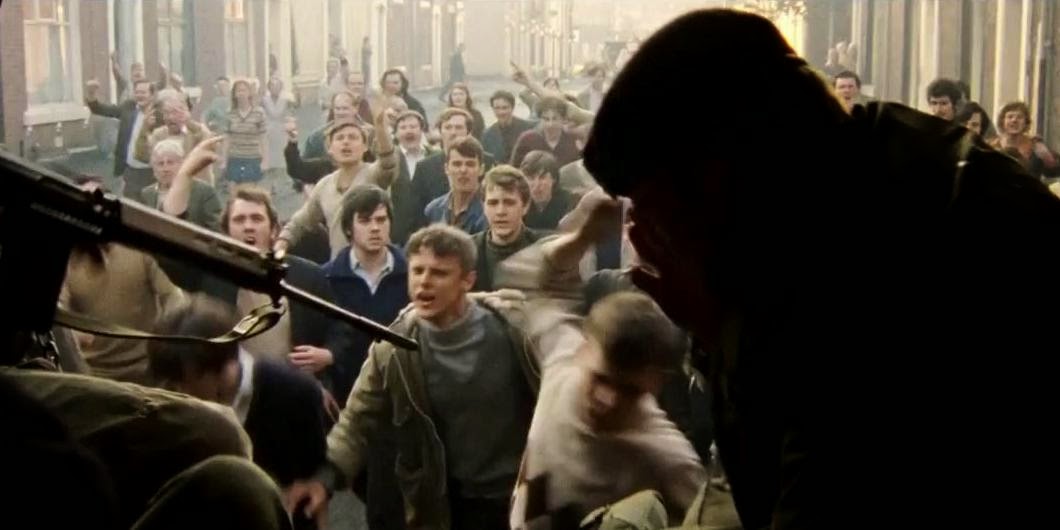 Whilst political violence has not been entirely eradicated from Northern Irish life, The Troubles and their once-potent place in the Western zeitgeist are fading from mind as far as most of the world is concerned. Many might be tempted to think, therefore, that any relevance to be found in ’71 is chiefly that of parable, evoking many a contemporary struggle, a portrait in deep-seated anger and convulsive popular struggle all the more striking for the lack of any overt, easily discernible difference between factions, only a lingering sense of historical and social grievance. The most interesting goal of ’71, the debut feature of experienced TV helmsman Yann Demange, is to convey the lay of this particular land through a sudden plunge into a series of incidents, allowing the viewer to regard both environment and underlying conflicts as if scanning a tapestry. The depiction of West Belfast (utilising locations in Liverpool, Sheffield, and Blackburn, ironic at a time when many British productions are heading over the Irish Sea) evokes a tawdry, impoverished labyrinth. Following Five Minutes of Heaven (2009) and Shadow Dancer (2013) in mining this subject, Demange aims to recapture the feel of early ‘70s Ireland, still familiar if also retreating to the fringe of recollection, a mix of telling images and contrasts – homely Victorian streets abutting cheerless modern flats, shaggy hippie-age hairstyles on glowering Celtic mugs, neighbourhood likely lads wielding guns with intent of grim murder, and above all the detachment of depressed urban Belfast from both the pastoral myths of Irish identity and the tarnished grandeur of Imperial belonging. 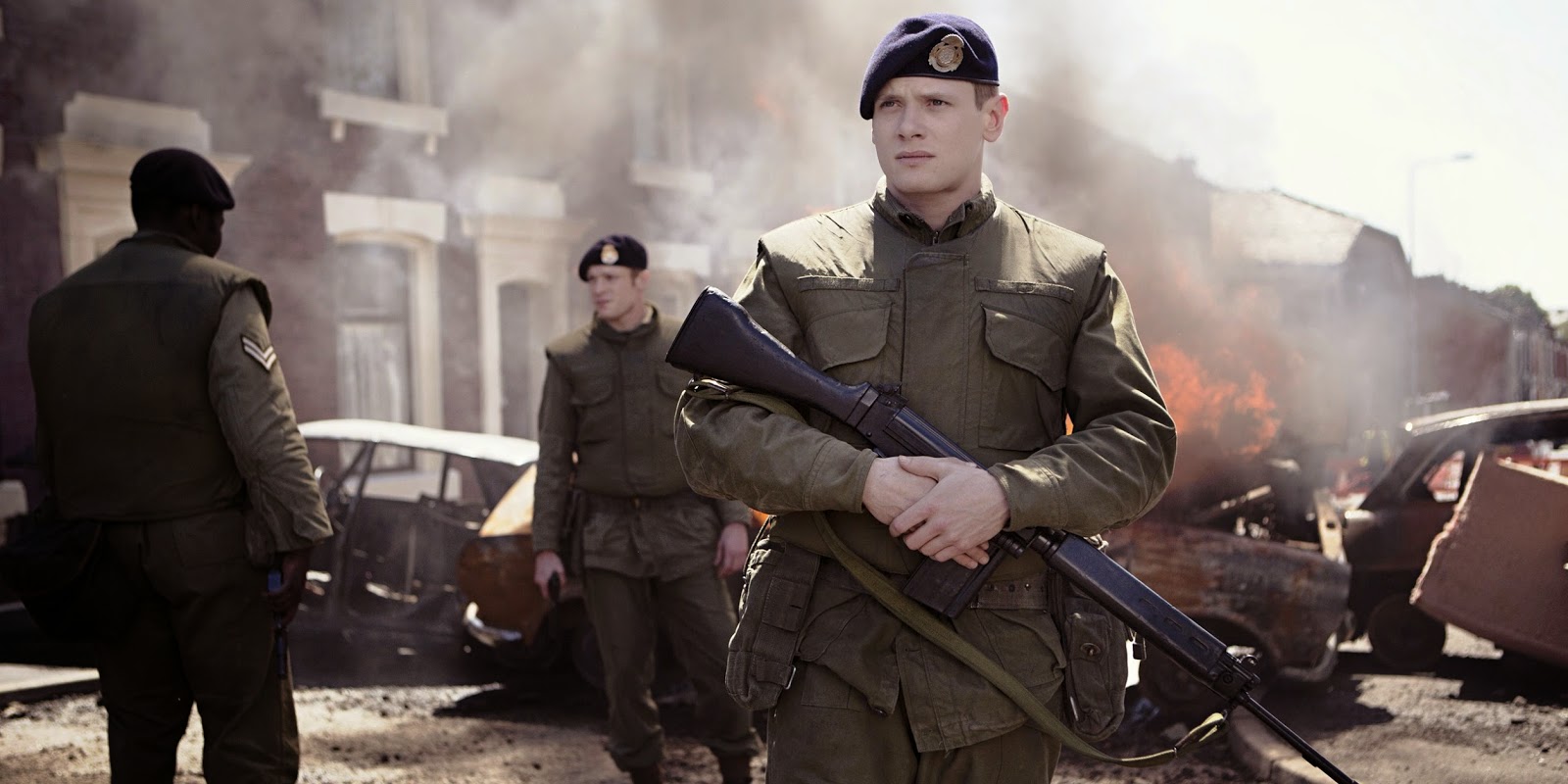 The survival drama enacted here is given weight by a reflection on the dark forces at work behind the facades of sectarian propaganda. Undercover agents in the Military Reaction Force, led by ruthless operator Browning (Sean Harris), are stirring trouble by helping Loyalist warriors “send a message” back to the IRA with repurposed bombs and playing both sides against the middle. A generational schism sees older IRA chieftain Boyle (David Wilmot) trying to keep a leash on Quinn. Young Sean Bannon (Barry Keoghan) wants to join Quinn’s cadre, but he might not be up to the task of cold-blooded killing. The trouble with ’71 is that its attempt to make a political thriller by encasing it within an intense chase drama does neither mode that much good. For the most part, ’71 is essentially a Cowboys-and-Indians nail-biter, The Warriors (1979) stripped of pop-art drag, or The Raid: Redemption (2011), for the vaguely political-minded. The film poses as an aware reading of the multifaceted historical situation, and does evoke the odd contradictions in the conflict where everyone on every side seems to have their contact on the others. But the villainy is frustratingly blatant and manipulative, the moral quandaries depicted broad and familiar, and the greater bulk of the film could have been set anywhere, any time, with, say, corrupt cops in place of the MRF and gangsters in the place of Provos. Although the setting and essential plot suggest an inversion of Carol Reed’s classic Odd Man Out (1946), swapping the Irish rebel wounded and alone in the midst of Belfast for a Brit, Demange’s film never begins to approach Reed’s for using a slender story frame to evoke a world of meaning. 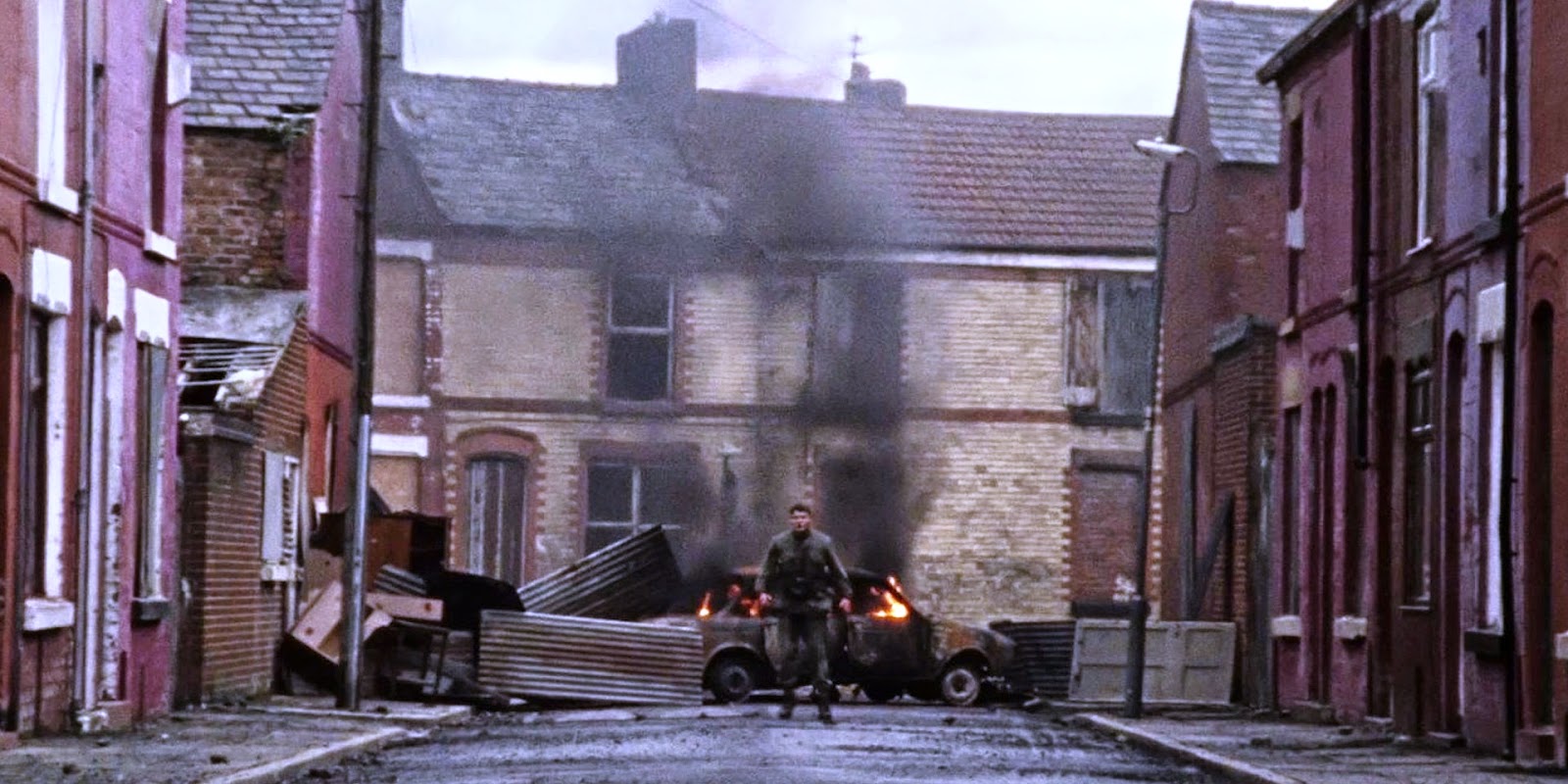 The blankness of the hero doesn’t help: when a young kid from a staunch Loyalist clan (Corey McKinley) asks Hook what his religion is and the soldier answers that he doesn’t know, it becomes apparent that Hook is conceived not just as low man on the worldly totem pole but as moral neutral in this deliberately schematic situation, one who might have more uncomfortable similarity to the flat avatars of Socialist Realism than just O’Connell’s noble jawline. For all O’Connell’s Olympic-level emoting, he strikes me as a surface-only actor, and Hook never feels like a particularly important character: our rooting interest for him is bought very cheaply. The film’s most powerful, deeply ugly moment comes when Hook seems to have found sanctuary with the boy’s loyalist clan, who run a pub where Browning’s MRF subordinate Lewis (Paul Anderson) is handing over a bomb to the loyalists to use against the IRA. Except that the unionists accidentally detonate the bomb and blow up the pub. Hook barely survives because he was standing out front, and he tragically carries the mangled body of the boy out of the fiery ruin and hands it over to swarming townsfolk, before stumbling away, bedraggled and bleeding, into the night. This is a bleak and hauntingly rendered vignette, but it also proves to be less evocation of terrorist horror than a plot device: it keeps Hook in the wilderness for a while more, and the fact he saw Lewis delivering the bomb means the MRF boys want to shut him down permanently, turning the story into a race against time. Hook is later found lying against a wall by two Catholics, Eamon (Richard Dormer) and his daughter Brigid (Charlie Murphy), and although aware they might endanger themselves by helping the lost and wounded man, take him to their flat. 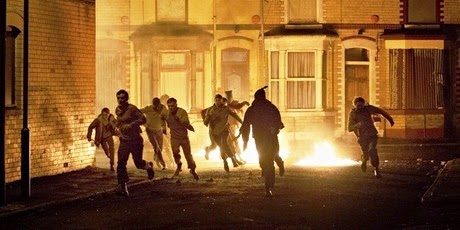 From here ’71 counts off thriller clichés: stitches without anaesthetic, family members moaning at each-other about responsibility versus safety, converging teams of good guys and bad guys, hide-and-seek stalking around council flats, and a final shoot-out, staged in a deserted pub where the team of rescuers prove to include a few enemies in their midst. Hook’s first killing as a soldier is utterly personal, jamming a knife in the gut of one his hunters, and forced to watch a man disappear from existence and leave behind dead flesh. Hook hesitates with his next target, who happens to be Sean, setting in motion a chain of mercy that will later save his life. Eamon describes his own time as a soldier, “Posh cunts telling thick cunts to kill poor cunts,” a line that positively drips with the screenwriter’s delight in offering a memorable epigram that captures a certain cynical ethos. But it accidentally points to an underlying hollowness in the film, a blunt melodrama dressed up as eloquence with a succession of merely functional, one-note characters, the kind of work that exemplifies the current obsession with “immersive” aesthetics in both good and bad ways, the belief that a raw and immediate replication of surface realism justifies reducing the characters and situations to stock. The closing scenes see Hook and Armitage being essentially told to keep their mouths shut so his superiors can overlook the MRF’s activities, with the shibboleth, “It was a confused situation.” But there’s actually too little confusion in ’71, as it neatly cross-references aggressors and good ordinary folk in spite of the murky factionalism. 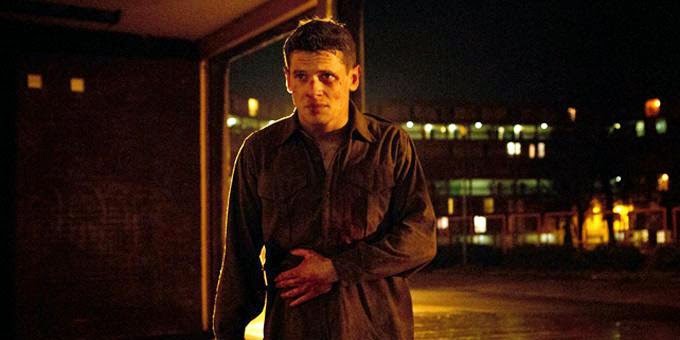 Nonetheless, Demange displays promise as a director, working with DOP Tat Radcliffe to create a blasted and eerie sense of atmosphere, painting the streets in sulphurous hues where every step in exposed space feels dangerous. As obvious as some of the suspense-mongering gets, Delmange generates some excellent images. The billowing smoke and air of dizzied shock after the bomb blast, Hook stumbling along with the kid’s body in his arms, utterly lost in the midst of humdrum surrounds turned into inferno. Later, when he looks out from the window of Eamon and Bridget’s apartment, seeing the sleeping city dotted with spot fires, turning the nightscape into a map of pain. The key scene of Hook’s separation from his unit manages to be both dizzying and intelligible as it observes a situation shift from children playing on an otherwise deserted street to a full-on riot within a few minutes. Demange captures a sense of eye-level oppression and anxiety, the jaggedly subjective and unnerving witnessing of events where the truth has to be gleaned from the most fleeting of glances, and the sudden, violent tides of emotion at once vividly personal and communally engulfing driving the whole rotten mess. It’s an excellent achievement in staging and film assembling that to my mind easily bests the over-aestheticised street violence in Selma (2014). Demange might have made a more original and important movie if he had the courage to film a series of striking episodes depicting civil chaos unleashed, something that tapped the inherent surrealism of a drama of savagery cheek-by-jowl with everyday life, or had perhaps made a film that dug deeper into the mindset of economic conscripts in the army. As it is, ’71 is effective, but in the end the only real thing the film has to say is that no matter your class, creed, or colour, it sucks to have people trying to kill you. 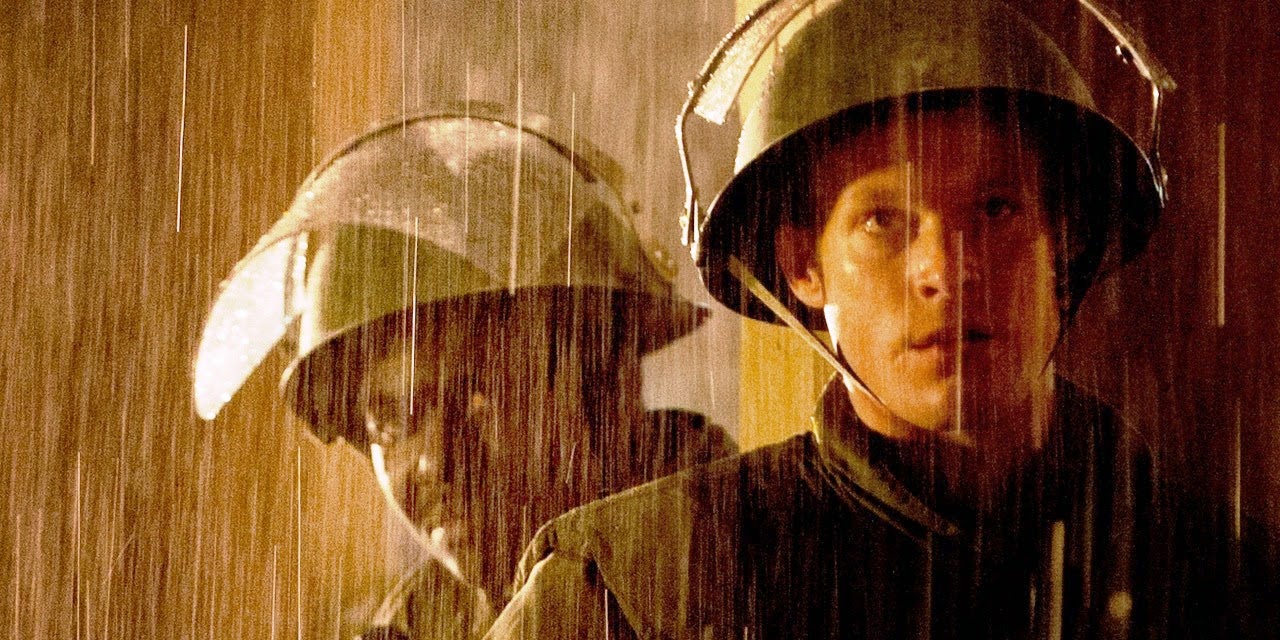