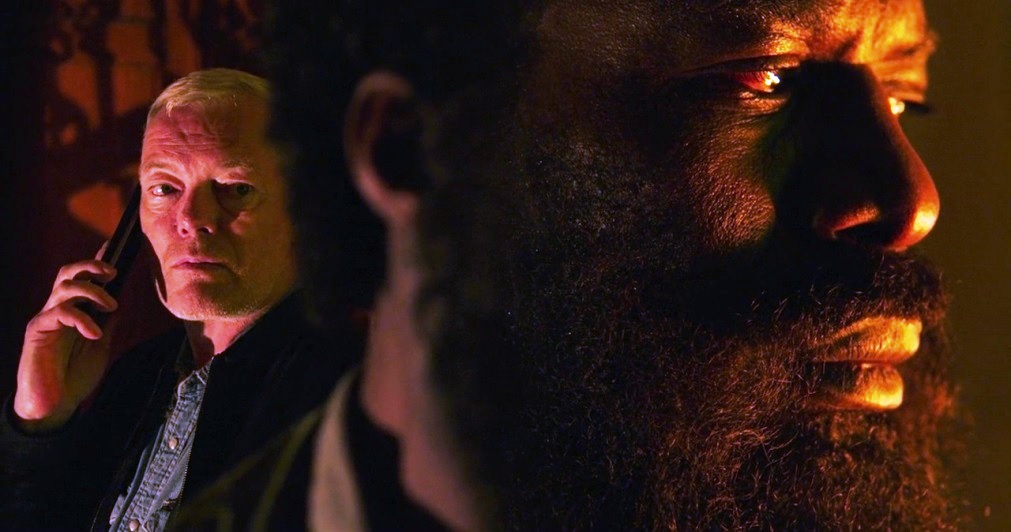 Brian De Palma’s first feature since 2012’s Passion, Domino was produced and set partly in Denmark, continuing the one-time hero of the movie brat generation’s late-career European sojourn. But the strictures of budgeting and production and disputes with backers proved dispiriting according to De Palma, and the result sat on the shelf for a couple of years only to now be released to a generally dismissive reception. Christian (Nikolaj Coster-Waldau) and Lars (Søren Malling) are partner cops in Copenhagen called out to a domestic dispute that turns out to be more than they bargain for: entering a depopulated apartment building, they encounter Ezra Tarzi (Eriq Ebouaney), who’s been torturing a man in a flat. The cops arrest and restrain Tarzi, but as Christian inspects the carnage he’s wrought, borrowing his partner’s gun because he left his at home, Tarzi breaks free and stabs Lars in the neck. Christian pursues Tarzi across the rooftops at Lars’ insistence but Lars collapses into a coma whilst Christian and Tarzi both plunge off the roof onto crates of tomatoes. Tarzi is snatched away by some enigmatic suited types, and Christian is left holding the bag, facing investigation and dismissal. Soon Christian and the detective assigned to investigate the incident, Alex (Carice Van Houten), begin following Tarzi’s trail, as it proves he’s been scooped up and set loose again by a CIA unit led by Martin (Guy Pearce): Tarzi is an asset to them because their aims are aligned in seeking Salah Al Din (Mohammed Azaay), a terrorist mastermind responsible for the death of Tarzi’s father. 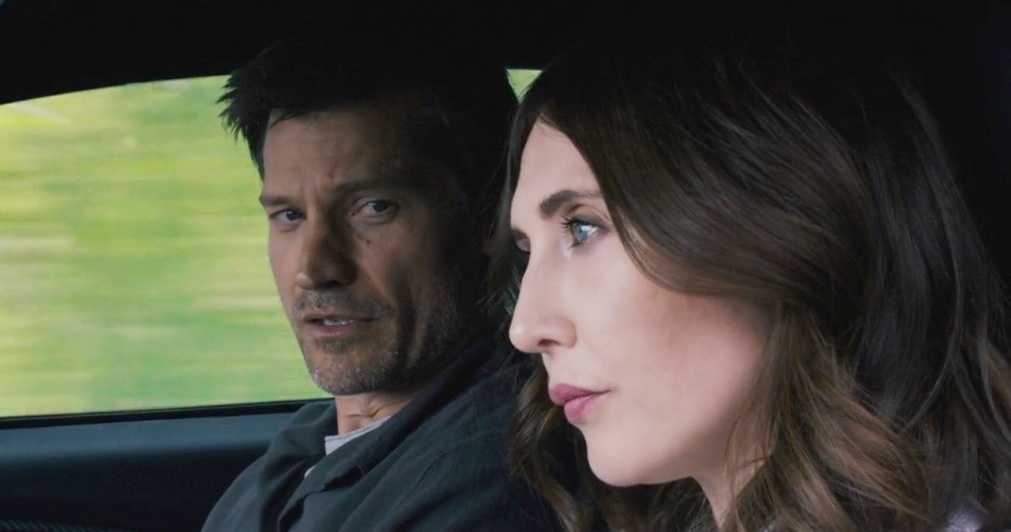 It’s hard to escape an initial impression with Domino that De Palma, once-mighty Hollywood thriller fashioner whose reinstitution of Mission: Impossible (1996) is still a going franchise albeit now in other, infinitely less creative hands, is slumming here, shuffling into the career twilight in cheapjack screen filler. Certainly, the movie we get is not the kind of symphonic achievement De Palma offered in his prime. With its exceedingly generic if ultimately apt title, Domino has a storyline far more straightforward and free of the kinds of elaborate games with psychodynamics and narrative disbursement than De Palma has long purveyed, instead offering what might in lesser hands have made for a solid TV pilot neatly in the Scandi-Noir zone. Despite De Palma’s best efforts with lighting and art direction, the photography can’t shake off the bland clarity of much low-budget, digitally shot cinema. But as happens all too often with contemporary cinema, that’s mistaking the wrapping for the actual gift. Domino proves a galvanising experience in regards to the current movie scene, as pure an auteurist artefact as any I’ve seen and one that, in its way, recalls many a late B movie excursion from the major talents of a much earlier filmmaking generation: Fritz Lang or Edgar G. Ulmer would have entirely understood Domino. 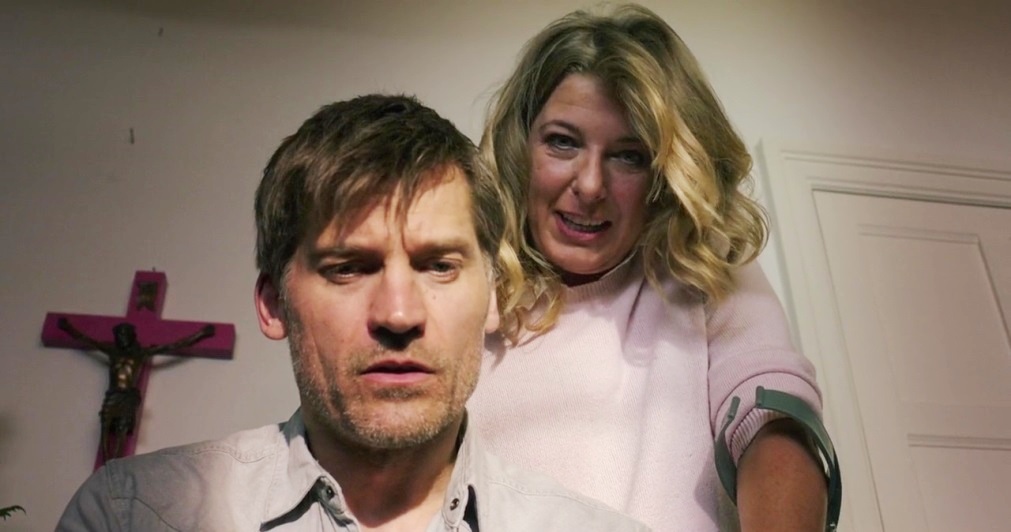 De Palma uses Peter Skavlan’s script as a springboard for suspense sequences composed with a lucid sense of staging and context that’s close to miraculous compared to the vast numbers of barely competent directors around today. Even seemingly serviceable early scenes prove charged with careful investment of meaning. One of De Palma’s most accustomed and compulsive motifs – a man who misses an important detail because he’s too wrapped up in a woman – is quickly deployed as Christian’s fatal failure to bring his gun is put down to his being drawn back into bed by the barista he’s boffing. De Palma cuts to Lars smoking silent and alone in his kitchen, seemingly a portrait of a different kind of angst: we’ve seen Lars with his limping wife Hanne (Paprika Steen) in homey security, one into which Christian is regularly invited without having or wanting, but as the story unfolds it’s revealed that Lars, like his partner, has his mind on a woman and not on the world immediately about him. When Christian dines with Lars and Hanne in their kitchen, Hanne shows Christian a magazine ad for a dream vacation: De Palma frames the seated man, the standing woman, and the large crucifix on the wall to composite a vision of competing modes of existence, domesticated life as a perpetual scene suspended between rigid internal faiths and far-flung fantasies. You can feel Christian all but cringing at the faint touch of its weight. 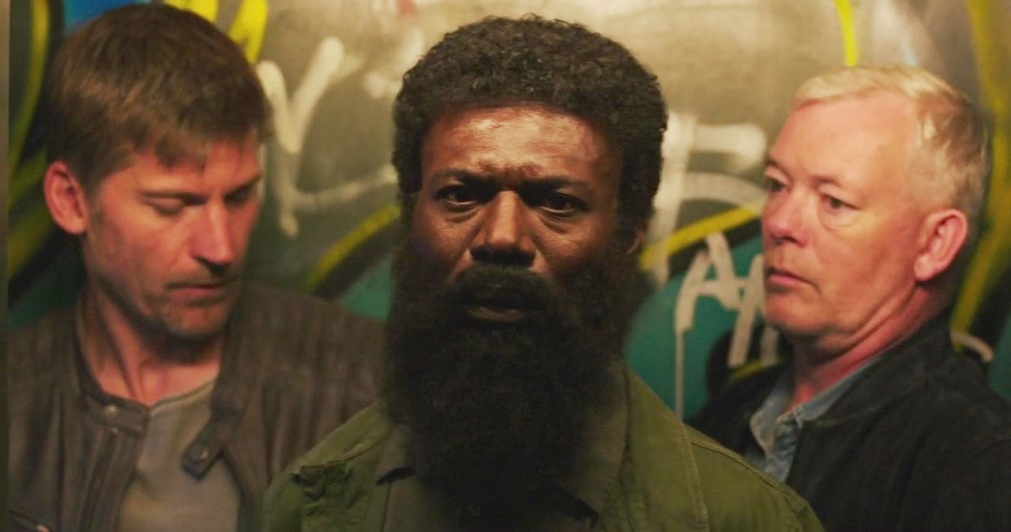 Christian learns later that Lars was having an affair with Alex, a turn that genuinely shocks Christian nonetheless as he had no idea about it, the presence of such enigma right next to him outweighing the machinations of spies and fanatics around him. Domino revolves around two sequences of expansive and carefully layered suspense-mongering: the first is Christian and Lars’ pursuit of Tarzi and the second a climax as Christian and Alex try to foil one of Al Din’s intended terrorist attacks in Spain. The first sees De Palma reverting to his classic blueprint of taking some Hitchcock quotes – the spiralling staircase and drainpipe-dangling of Vertigo (1958), the stepping-stone zoom on a gory sight of The Birds (1963) – and improvising around them jazz-like. De Palma’s more individual sense of crisis then comes into play, as something terrible and impending is made obvious to the audience but only unveiling itself to his protagonists as events outpace their receptivity. Christian beholds the mangled result of Tarzi’s vengeful handiwork inflicted on some pathetic Al Din operative whilst Tarzi calmly tries to work his escape from his handcuffs under Lars’ nose. 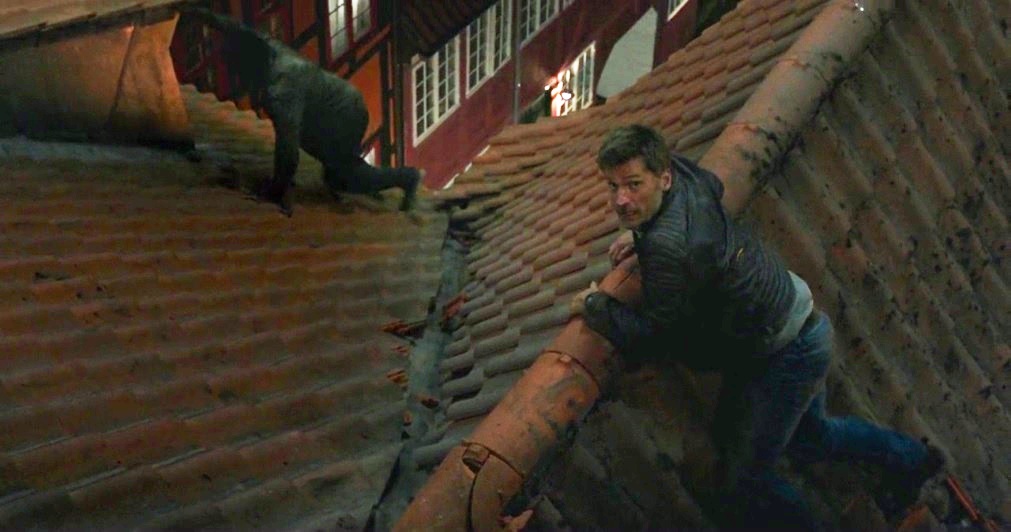 Colossal close-ups link the corporeal savagery of Tarzi's handiwork with the silently knowing glaze to his eyes, plunging us deep into a zone of near-atavistic vengefulness and determination the cops can barely comprehend at this point. It takes raw loss of both a friend and innate self-respect to galvanise Christian, who spends much of the film looking like a waning golden boy faced with proof of his own ridiculousness, into the potent warrior such a quest requires. His chase of Tarzi over roofing shingles has an almost languorous quality as the two men are obliged to be more careful than speedy, Lars watching his partner wane and bleed from a helpless vantage. The storyline revolving around a clash between terrorists and state power with a vigilante and civic guardians caught in between feels, perhaps inevitably given the film’s delay, ever so fractionally past its prime. Pearce’s portrayal of a strutting, arrogant yuppie in patriot garb hits a note that’s been sounded quite a few times in the post-9/11 critique. 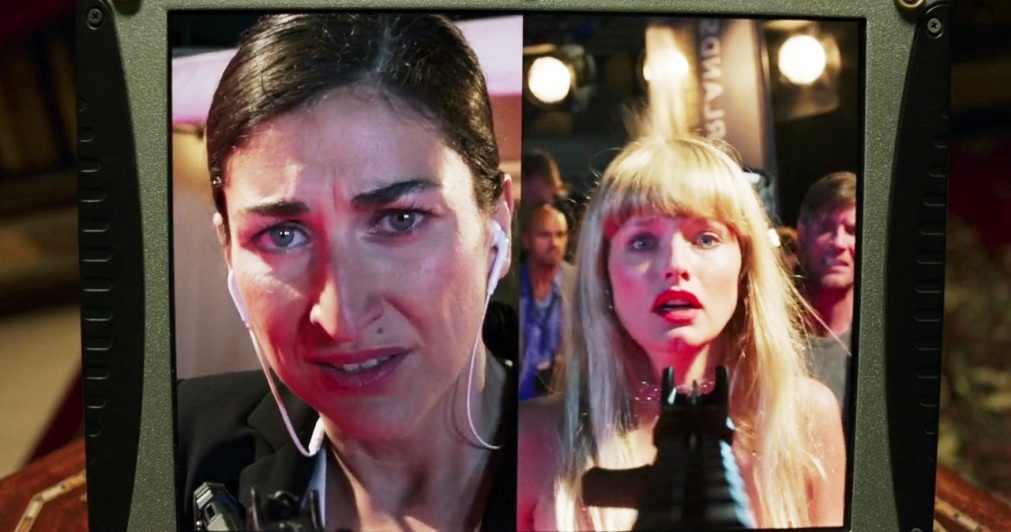 And yet the direction De Palma takes it in proves almost maliciously keen to our moment when events like the Christchurch Mosque shootings evince just the sort of psychopathic showmanship staged as a social media event De Palma depicts here. Much as he signalled with less finesse and wit in Redacted (2007), De Palma approaches the fallout of the War on Terror with an eager comprehension of a fight on multiple plains of action, enabled by technological advancements that allow simultaneity of being and seeing. Al Din’s auteurist approach to terrorism is to carefully stage them with body cams and drone photography to make them orchestrated events of propagandistic violence. De Palma correlates his own directorial vision with such excursions, as Al Din coaches a hijab-wrapped starlet, Fatima (Sachli Gholamalizad), for a red carpet debut, albeit one where she’s required to machine gun arriving stars at a Dutch film festival, before detonating an explosive vest for a big bang finish, bringing death to the celebrities and being one at the same time.  Al Din watches from on high, footage beamed back to him allowing him to see Fatima's pained yet determined war face in the same frame as the fear and horror of her victims -- an image De Palma might as well have been working towards his whole life. 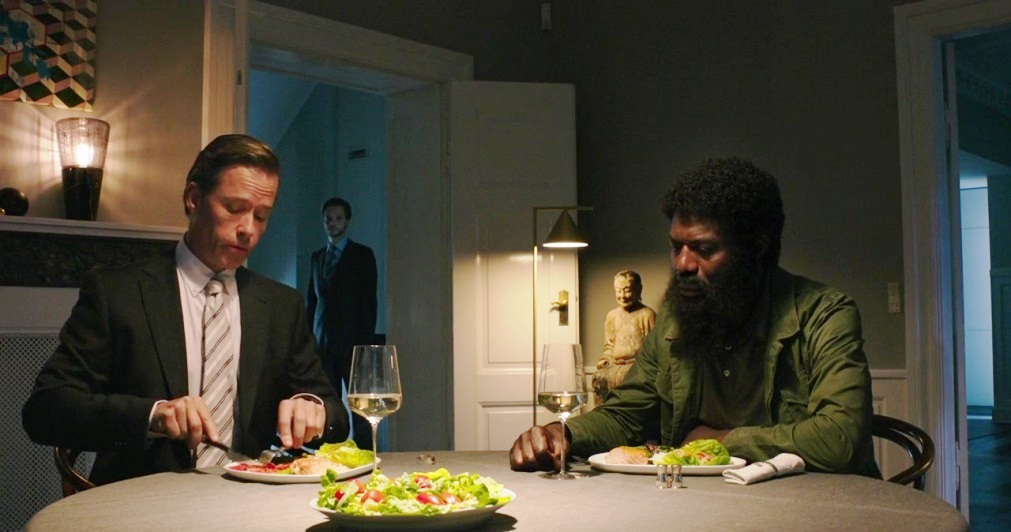 The captured footage is then edited into a tight unit of cinematic impact for free dissemination online, an agitprop creation that long outlives its makers, allowing the deed to escape the ephemeral and the specific moment to become an ongoing act of radical violence. All barriers between political act and art have vanished. By contrast Martin, who in De Palma’s paradigm can be seen more as an eager studio executive, uses networked screens to torment Tarzi into cooperating by letting him watch as Martin browbeats his son. Christian and Alex untangle the means of Al Din’s seeming ability to stage such events at will as based in deception and irony – the tomatoes that save Christian’s life are also a means of smuggling weapons. But Tarzi has a deep instinctual and procedural advantage over them, an advantage that Martin trusts in through his believe that revenge is the great motivator. Ebouaney’s presence as Tarzi imbues Domino with some interesting implied political perspective, as it subverts the familiar paradigm of white westerner reprisal for Islamic extremist carnage by noting that people in North Africa have suffered much more at the hands of such movements. 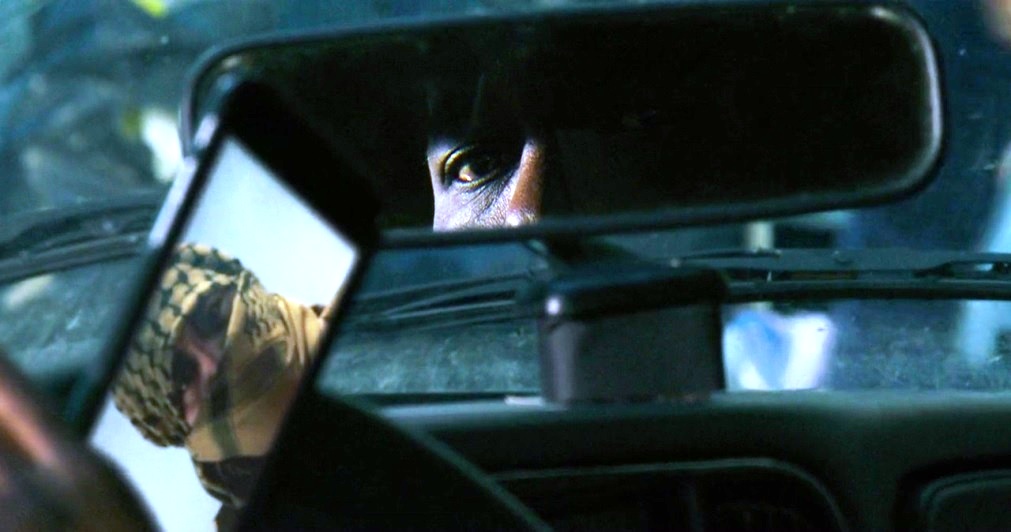 At the same time De Palma regards Tarzi as a monstrous by-product himself, as a man pushed to realise the possibility within himself for intimate and sadistic violence to expiate grief and rage, slicing off fingers and drowning a restaurateur in his own saucepan full of soup: he’s reminiscent of such storied De Palma protagonists as Winslow Leach, Carrie White, and Tony Montana. In contrast to them however he doesn’t hold the centre of the narrative. There’s also the attendant irony of oblique forms of retaliation: Tarzi’s programme of payback stirring an equal and attendant desire for Christian and especially Alex to get even with him. Christian soon finds that a superior who seems to have it in for him is actually one of Martin’s enablers. He and Alex follow the thread to Belgium and then Spain, proving their mettle as partners as they cut loose on some  punkish miscreants, establishing Alex’s highly effectual way with a kick to the balls. Domino has many of the qualities old B-movies often wielded with careless gusto. The to-the-point narrative feels almost radical and certainly refreshing in its unfussy cohesion, the directness of its themes and characterisations. The revelation of Alex and Lars’ affair is offered not to implicate some mind-bending twist but to lend new volatility to the way character and plot interact. 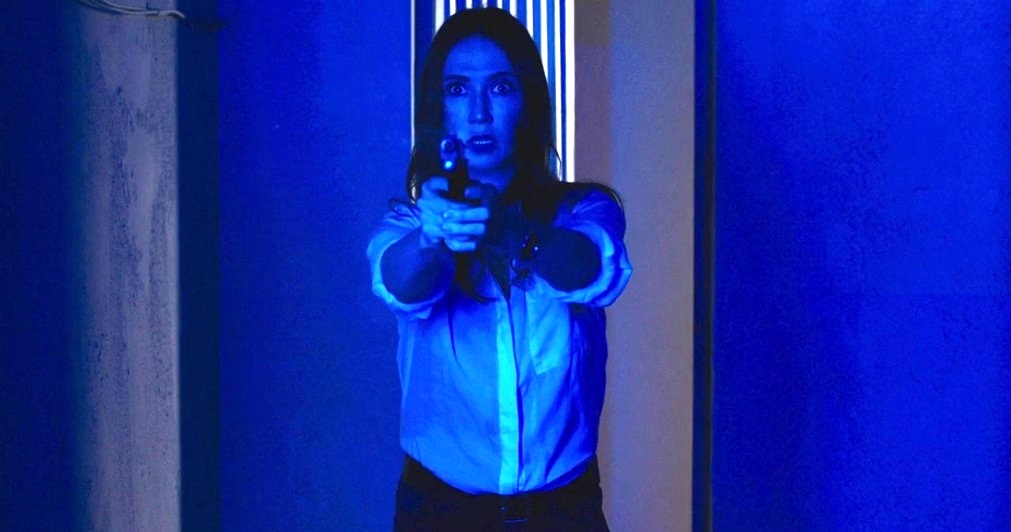 The finale, where Al Din tries again to orchestrate a suicide bombing as media event in a bullring, sees multiple plains of action and interlocking events staged with ingenious verve, Christian battling Al Din and operatives on high whilst Alex tries to intervene with the bomber below, action bathed in saturating blue neon from a huge logo sign that renders life-and-death struggle a form of branded content. It’s truly striking how sleek and integral this is compared to the superficial but disjointed imitation of De Palma’s kind of high style in something like Atomic Blonde (2017). De Palma again explores variations on some of his earlier set-pieces, particularly the opening of Femme Fatale (2001) and the finales of Blow Out (1981) and Snake Eyes (1998), with evil defeated by a combination of real grit and a dash of absurdist good fortune. The cycle of revenge moves on another notch, if perhaps with the hope of catharsis, but the art of murder continues to resound across cyberspace to an unknowable end. It could be said that Domino crashes to a halt just as it’s really gathering momentum, but again the pithiness of the film, the absence of narrative gimmicks and overworked dramatics, ultimately feels more like a plus. Also it’s a potent reminder of what genuine film style looks like. De Palma might be one of the last remaining filmmakers who still readily and casually shows up the difference between merely showing events in a televisual manner or assembling prettily photographed bits, but actually turning them into a truly cinematic, aesthetic event. 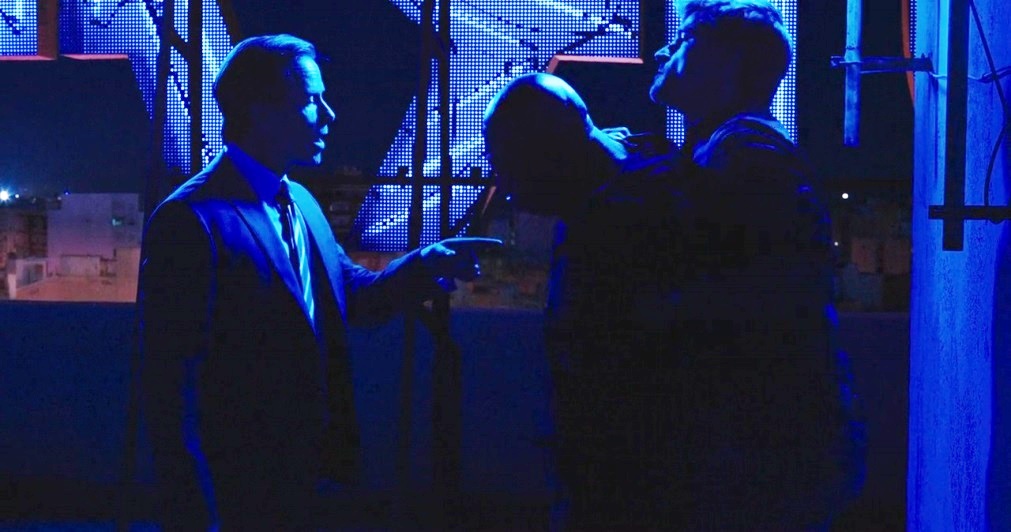